On Sunday, despite the windy, cloudy and rainy weather, I decided to take part in a guided training walk organized by two Belgian naturalist associations (CEBE & Cercles des Guides-nature du Brabant). The theme was “late spring flowerings” and the location a very interesting humid reserve in Eastern Brussels called ‘Hof Ter Musschen’ (‘Sparrows farm’).
There were indeed some interesting flowerings like the Water Forget-me-not (Mysotis scorpioides, lovely flowers as you can see!) or the Ragged Robin (Lychnis flos-cuculi).

The walk really got thrilling when I discovered that big guy, sleeping on Cow Parsley (Anthriscus sylvestris). It’s a male Poplar Hawk-Moth (Laothoe populi), with a wingspan of 9 cm. The adult do not feed, and lay their eggs on poplar of course, but also willow, alder or elm. Doesn’t it look beautiful?

In the marshy zone, I managed to catch that 5 cm centipede. They are powerful predators of other insects, and their bite can be dangerous…but not in the case of temperate species. Don’t worry…holding it on my  hand was not risky! I would not advise to do the same with the 20-cm long one on the right, seen on Borneo 😉 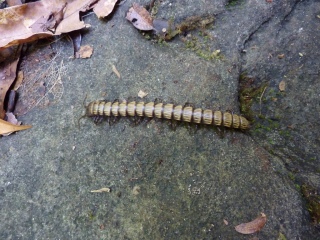 On Monday, near my hometown Thionville, I spotted those two beautiful Longhorn beetles who where actively mating on a stone wall. They were about 10 cm long, so not really the kind of insect you would be expecting in the French countryside! 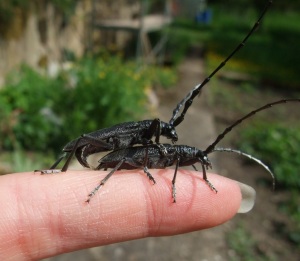 Other examples of large insects found in our climates are the European Rhinoceros (Oryctes nasicornis, 5 cm long, massive beetle) or the Brown Hawker Dragonfly (Aeshna grandis, and its impressive 12 cm wingspan). 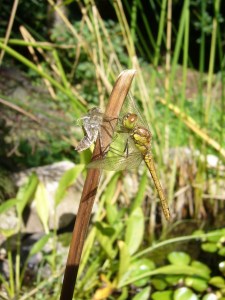 Who said big insects were only found in the tropics? I think we have our share too! 😀