But I should tell you first what an “invasive” species is! In their most common definition (here is DEFRA one), these are “non-native plants or animals, which have the ability to spread causing damage to the environment, the economy, our health and the way we live.” There are many non-native plants and insects, introduced voluntarily (like many of our garden plants, vegetables etc!) or involuntarily (mostly through air or water transport)….but only a minority of these non-native species become invasive!
Sadly, though, the number is not really the problem. Some of these species can have disastrous consequences : loss of biodiversity ; poisoning of humans & animals ; allergies ; diseases ; economic losses…

This special week focused on Himalayan Balsam (Impatiens glandulifera), a lovely-looking pest. Introduced in the 19th century as a garden plant, it has spread all over Europe and has taken over river banks and other damp habitats. It can grow up to 3 meters, with strong stems and clever roots. 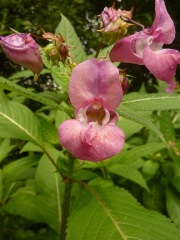 Himalayan balsam, with its showy and nectar-loaded flowers attracts pollinators, and tends to outcompete native species. But the biggest problem is certainly the fruits : when ripe, they explode, and send the seeds up to 7 meters away! Even worse : as it grows on river banks, the seeds can be dispersed by water. No wonder it has spread so quickly and successfully…
Himalayan balsam is thought to increase the risk of floods (when it dies in late autumn, it leaves the soil bare, which increases run-off) so it has been considered seriously by authorities. The most efficient way of tackling it is hand pulling, so volunteers all over the country have a hard job!

The first site where I volunteered is located near Stonebridge Wharf, Shalford. We arrived in a tall-grass fen, which has Himalayan Balsam on its edges. A new (and cute) plant for me : Scutellaria galericulata (Skullcap)….and piles of pulled-out balsam (feels good :D). 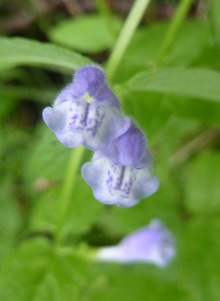 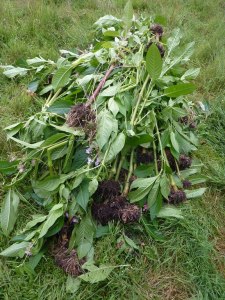 We moved towards the river, pulling Himalayan Balsam in ditches on our way. I can’t resist showing you this Beautiful Demoiselle (yes, that’s its name!). I’ve never seen any in France or Belgium, but they seem pretty common around here!

In the afternoon, we did more Balsam pulling. While putting some plants on a big pile, I snapped two weird parasites…would Himalayan Balsam be vulnerable to something? Unfortunately, no. It looks like those two things are slime molds, which feed on micro-organisms and only use stems as a support. No clue about n°1, but the second one is Dog Sick (Mucilago crustacea) : rather disgusting 😮 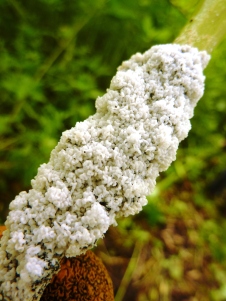 I’m just starting to get interested in moths, so here are two new ones : the Common Footman (Eilema lurideola, bizarre oval shape, yellow sides) and a micro-moth. I also noticed some rolled-up leaves which are probably cocoons… 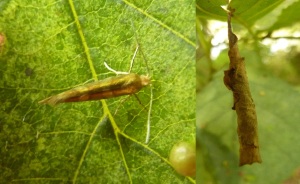 EDIT : the rolled-up leaf is not a moth cocoon, but a weevil cocoon (Deporaus betulae). The female beetle cuts the leave, rolls it up, lays its egg in it, the leaf dries, and voilà!  http://sussexwoodland.wordpress.com/2011/06/09/birch-leaf-roller-deporaus-betulae/

On Thursday, we started by doing a transect survey, starting at Godalming Wharf and walking East, along the river, focusing mainly on invasive species (but we ended up recording everything!). A lovely view of the River Wey as a starter :

Plants aren’t the only non-native invasives in the UK. A well-known insect example is the Harlequin Ladybird (here you have two different colour forms of the same species, tricky! : Harmonia axyridis spectabilis and succinea) which is detrimental to native species like this very small 14-spotted ladybird (Propylea quatuordecimpunctata). 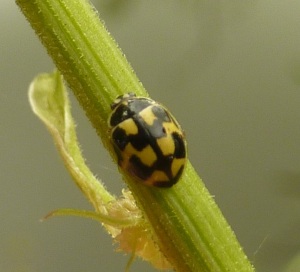 A bit of non-invasive insect recording with a mirid bug, Heterotoma planicornis (pretty distinctive, with its flattened antennae and bright green legs). I can’t help but finding this weird bug cute. 😆 On Himalayan Balsam (damn), a common  longhorn beetle, Leptura quadrifasciata. For once, an easy-to-ID species, with orange markings.

In the afternoon, we did more Balsam pulling around a lovely pond. Himalayan Balsams have grown so high there that they form a thick cover, and deprive smaller native wetland plants (like Water Forget-me-not, Purple loosestrife or Brooklime) of light. Hopefully the pulling will have a positive effect, and allow native plants to grow better, at least for this year!

While pulling balsam, I noticed this plant, looking strangely like a small version of Himalayan Balsam, but with weaker stems, and orange-red flowers. It is Orange Balsam (Impatiens capensis), a north-american relative, also introduced as a garden plant. It has spread widely in the UK, and must be watched, but it’s certainly not considered as invasive as its cousin Himalayan Balsam.

Overall, it was two interesting days! I continue to discover the area around Guildford, and frankly, I just love it for now ! 😀