Last week, I had the chance to take part in a (free – how amazing is that!) GCN Course organized by the amphibian conservation charity Froglife as part of their brand new Dragon Finder project (all info here : http://www1.froglife.org/dragonfinder.aspx).

GCN, for the uninitiated, refers to the Great Crested Newt (Triturus cristatus), a beautiful European amphibian. It is the largest of our newt species, measuring up to 18 cm, and the males have a distinctive jagged “crest” along their back. Populations of GCN have decreased sharply in Europe over the last century, mostly because their ideal habitat, a network of clean, well-connected ponds is under pressure of human activities. 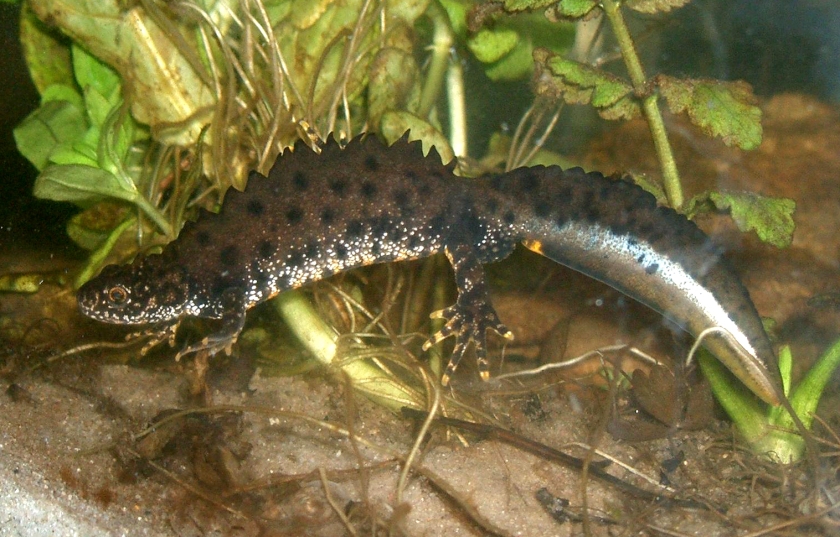 After a good theory part, we headed to a nearby pond in Bushy Park (near Hampton Court) to put what we had learned into practice.
The likely presence of great crested newts in a pond can be predicted by looking at a set of 10 different criteria : the location (GCNs are more common in England than Scotland), size of the pond, if the pond dries out and how frequently, water quality, shade, presence of birds and fishes, number of other ponds found within 1 km, quality of the terrestrial habitat (yes, newts do spend most of their time out of water!), and macrophyte cover (how much of the pond is covered with plants).
A score is given to each criteria, and the HSI (or Habitat Suitability Index) is calculated (it ranges from 0 for very unlikely habitats to 1 for perfect habitats). 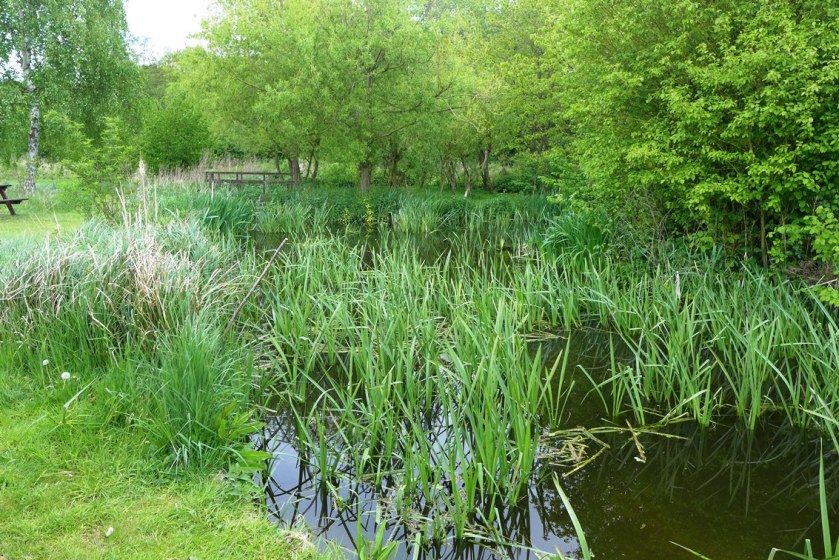 But as we found out for this pond, it’s obviously not as straight-forward as it sounds, because some factors can be hard to determine (birds can fly away for a few minutes, and fishes are not always easy to see!).
There was plenty of life to be seen in the pond : tadpoles (scraping the walls for food), a dragonfly larva, an enormous daphnia (or water flea – crustaceans which filter water and serve as good food for tadpoles!) and a gelatinous water snail egg mass.

Next, we headed a bit further into Bushy Park. Apart from managing deer populations, the Royal Parks have also been working with Froglife to enhance the habitat for amphibians.

In the Canal Plantation area, holes have been dug, and are filling with ground water and rain, in order to create little ponds. And we had the first sighting of amphibians there, with this cute tadpole (you can even see its gills) :

An interesting sighting on a wooden fence nearby : an alderfly (Sialis sp). It belongs to a small and relatively unknown insect order, the Megaloptera, which all have aquatic larvae. They are poor fliers as adults, but their presence indicates a good water quality.

The tadpole was freed and we headed to another area in the park, Hampton Hill Pond. Despite its small size and urban location, GCN have been found in this pond in the past, so we started surveying with torches, and also searching for potential newt eggs. 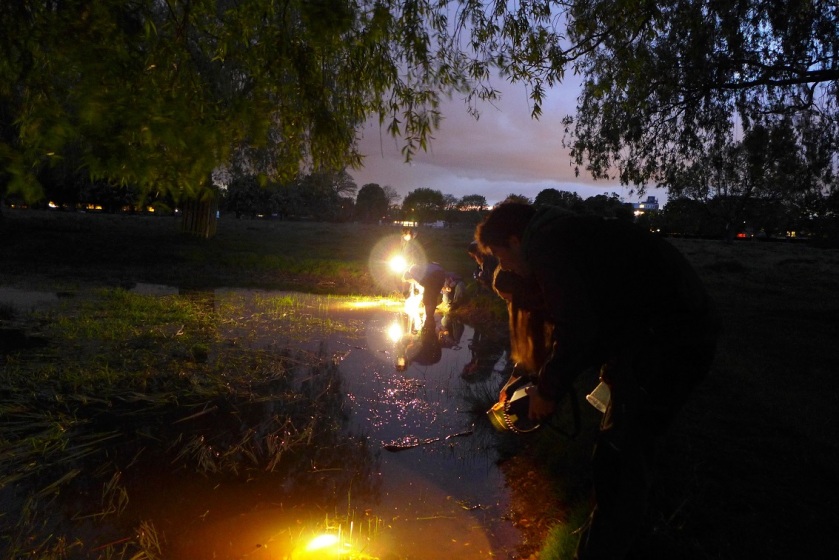 Newts tend to lay their eggs on leaves (or more unusual material such as plastic bags), which are then folded or turned to protect them from predators….and here is one, already well developed (despite the crappy picture, you can see the tail, the gills and a lateral stripe). Given its large size and whitish colour, this is certainly a Great Crested Newt egg.

Torching was rewarding as we saw many newts, but the only one I managed to snap under water was a very fat small newt female (probably full with eggs) – next time I shall try with my diving camera 🙂

Netting is another method used to survey newts, which allows a closer look. Someone saw a Great Crested male during torching, so we know adults are present in the pond, but sadly we didn’t catch one. We netted many smooth newts (Lissotriton vulgaris) though!
The male (bottom) has a regular, rounded crest on its back (absent in females), an orange belly, and a whitish, spotted throat.

Another interesting inhabitant of the pond that was found in the net is a horse leech (Haemopsis sanguisuga), which despite its large size and frightening name does not suck blood! It does feed on snails, worms and aquatic larvae such as… tadpoles! 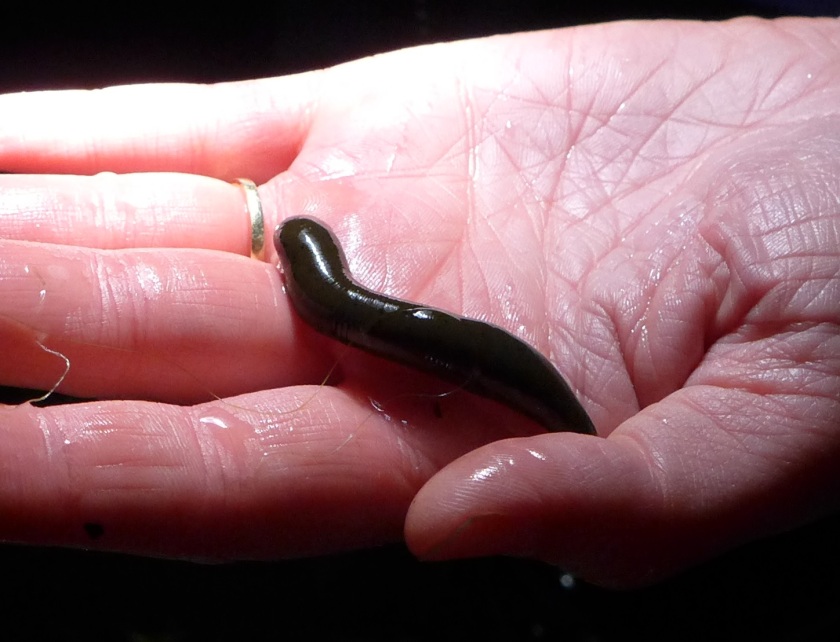 Overall, the course was good fun, and at the same time packed with a lot of information – I don’t think there are any more planned for this year, but Froglife is organizing other amphibian-themed events.
The charity is also developing a solution to something I always find so frustrating, biological recording. Their smartphone app will allow everyone to record sightings of frogs, toads, lizards, etc in a few clicks, even using the GPS for precise location. It’s not out yet – but I think it’s a nice example showing how technology can help nature!