Our last long-haul and almost disastrous holiday was in 2011 in Indonesia. This year, we spent a lot of of time trying to determine what would be the best destination. Vietnam sounded like a reasonably good choice: tasty food, decent climate and interesting plants (many of which are being grown in UK gardens).
We spent our first full day in the Northern capital Hanoi. It is true that the city has a lot of historical character and many old buildings (particularly French colonial architecture): 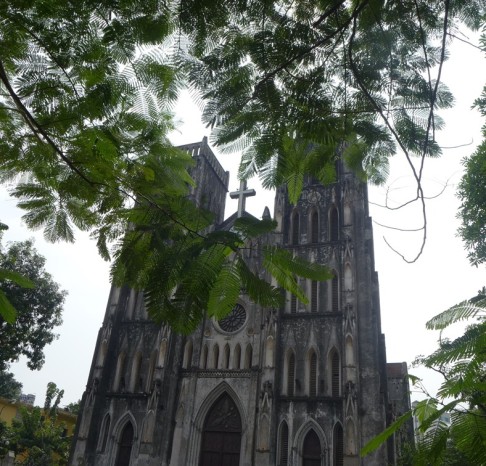 It is often described as vibrant and exciting. However I personally found the traffic, the noise and the pollution totally unbearable (even to a Londoner’s standards). The streets of the Old Town look like this. Ugh. 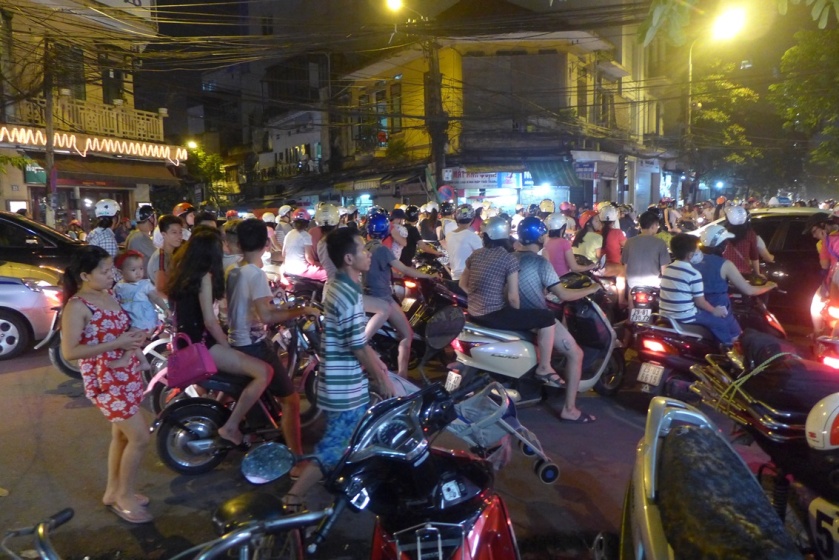 The street merchants are quite interesting. Many use the traditional carrying poles with two baskets to sell fruits, vegetables, cooked foods and especially herbs such as Vietnamese coriander or mint, as they are widely used in cooking. 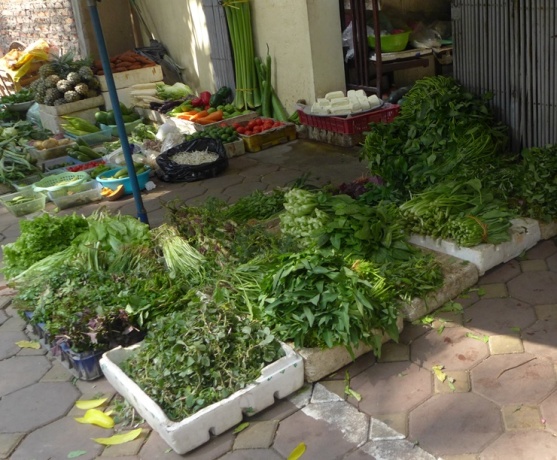 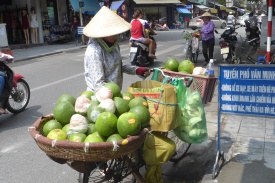 In addition to colourful orchids and anthuriums, florists also appeared to be selling much more temperate flowers such as chrysanthemums, pinks (Dianthus) and hydrangeas. Weird! 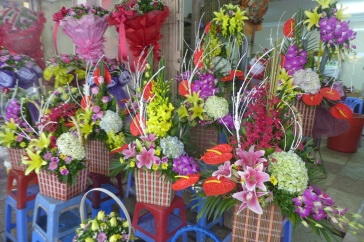 To escape the hustle and bustle of the Old Town, we decided to wander around Hoàn Kiếm Lake, a major scenic point in the city: 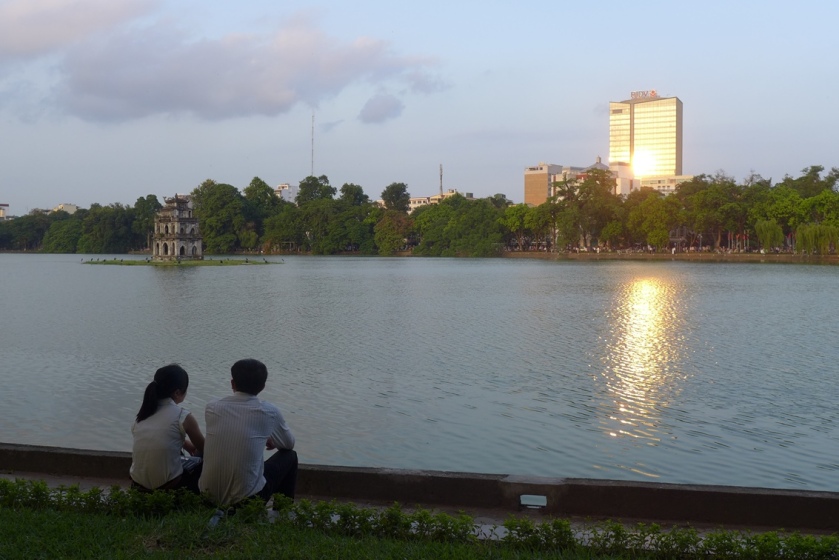 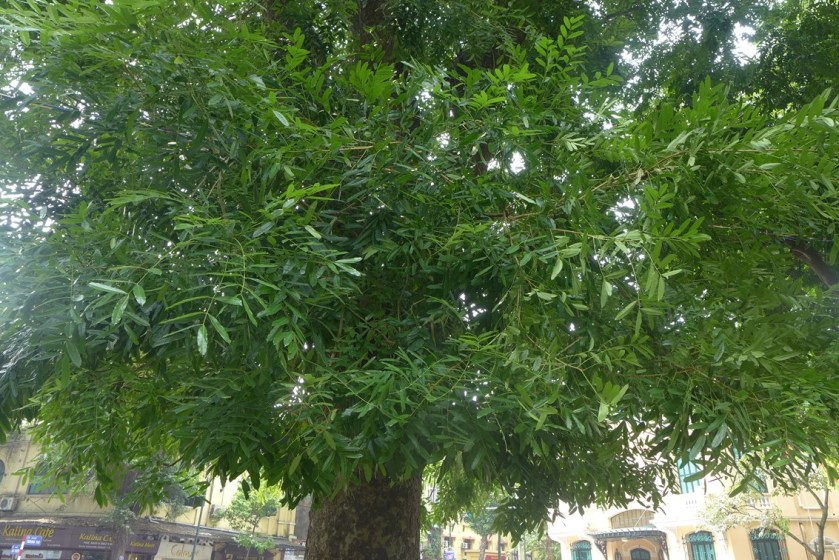 There are also willows, conifers, palms and large Ficus (such as this rubber tree, Ficus elastica), Dracaena and cycads:

Having visited the surroundings of the lake on our 1st day, where most of the ground under the trees was occupied by tropical grass species, we were quite surprised on the second day to see this scene: dozens of workers in their blue uniforms, digging grass, opening boxes and plastic packaging to unveil hundreds of pots of Anthurium, azaleas, Kalanchoe, Poinsettia and small variegated Schefflera, all coming from China! Horror! We then found out that this was part of the celebrations for the  60th Anniversary of Hanoi’s Liberation.

Street plantings in Hanoi are a feast for the eye. Posh shops use niwaki conifers and delicate palms such as the native Phoenix roebelenii:

But there are also less civilised plants, such as this Chinese Tallowtree, Sapium sebiferum, which has decided to make its home in the  brick wall of Hanoi prison… 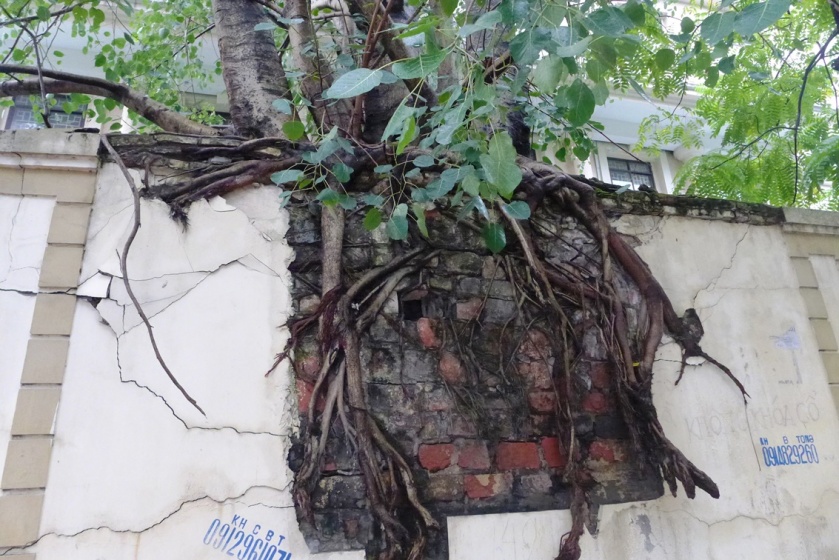 A big feature which I have seen in no other Asian cities is bonsai-style pots, which are used for virtually every plant, whether it is Adenium obesum, Ficus benjamina or cycads: 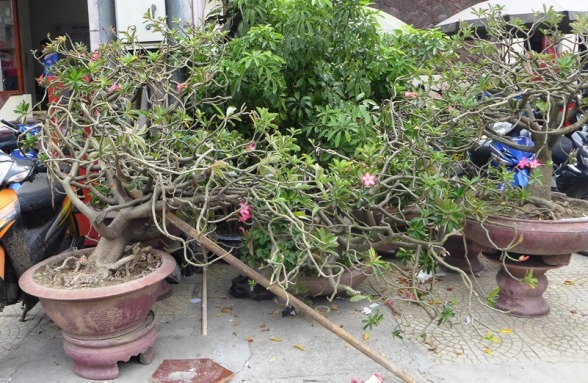 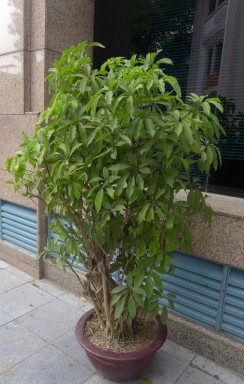 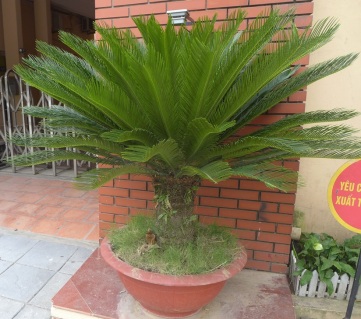 After Hoàn Kiếm Lake, we decided to visit Hồ Tây, the Western Lake, which is much bigger than its central counterpart. The main tourist feature is the Trấn Quốc Pagoda, a 17th century buddhist temple.

Apart from the traditional Flame trees, the banks of the lake are occupied by smaller plant such as the Panama Berry (Muntingia calabura), a South American tree which has become naturalised in parts of Asia: 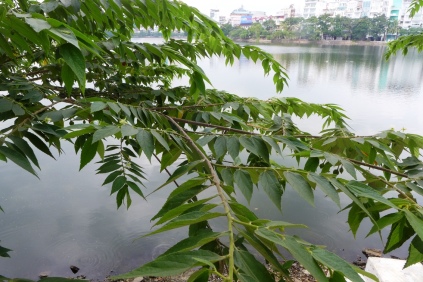 To conclude our stay in Hanoi, what better than a little detour by a supermarket to discover local delicacies? It is quite amusing to see so many French products on the shelves, like Président cheese and Bonne Maman jams (links between the two countries are still very much alive). But for something more authentic, I could offer Boga Tra, a herbal remedy for liver problems made of artichoke (Cynara scolymus), Tora (Cassia tora), Chamberbitter (Phyllanthus urinaria), the foxglove relative Adenosma glutinosum, mempat (Cratoxylum prunifolium), the loosestrife Lysimachia christinae, Panax pseudoginseng and a bit of sugar substitute Stevia rebaudiana. Tempted?

Next, we embark on a trip to the mountainous areas of Western Vietnam, around the town of Sapa…