Yesterday, the following petition was shared on Twitter, causing a stir among some of my followers:

At first sight, it looks like a reasonable proposal. The concept of “Green Belt” in the UK was first introduced in the 1930s, when urban sprawl around London started to affect the surrounding countryside and particularly remaining woodland areas. Green belt designation imposes specific planning constraints, with the aim of protecting biodiversity, offering a buffer between the city and the countryside, and absorbing part of the pollution from cities.

But Green belt is threatened. Councils are pressured to build more houses and are motivated by commercial opportunities and offers from developers. Green belt area has decreased in the past few years, and as a result, campaigns and petitions have been multiplying. A search on the Government platform for petitions returns a long list of results:

What these petitions reveal is our dramatic lack of knowledge of ecology and UK habitats. The details of some of the petitions are even more telling:

Greenfield Sites continue to be considered for development when large brownfield sites sit derelict nearby. This is irresponsible planning which is harmful to the local environment. Greenfield sites should be protected from large developments until all local Brownfield sites have been redeveloped. […] In my local town, a large Greenfield site is being considered for development. It is filled with ancient oak trees which are home to hawks, woodpeckers, owls, bats and other wild birds. The field is home to frogs, pheasants, foxes and a family of Roe Deer. […] However this is all to be destroyed while numerous substantial Brownfield sites are left derelict, dilapidated, crumbling and of no natural value.

Can we really blame the public for being ignorant? Of course not. The term “brownfield” was created by American planners, and started appearing in European planning policies in the late 1990s. ‘Brownfield’ is defined as “an area of land or premises that has been previously used” but has subsequently become vacant, derelict and may be contaminated. “Brownfield” is purely a policy term, which does not give any indication as to the type of habitat, its use or its biodiversity value. The word “Greenfield” isn’t used in policy, but commonly refers to the opposite of brownfield, i.e land that has never been developed.

In people’s minds, “Greenfield” or “Green Belt” has become synonymous with untouched nature, rich in flora and fauna. But how many people realise that the “Green Belt” covers villages, industrial sites, intensive agricultural land which may full of pesticides or, even, indeed, brownfield sites?

Brownfield is, by contrast, seen by most people as being devoid of fauna and flora, and having “no natural value”. This other petition for example called for “inactive Brownfield site landowners to sow wildflower seeds on their sites” to help bees…

Scientific research, though, provides so much evidence to demonstrate the importance of brownfield land. Brownfield land develops as a result of land abandonment, and often contains low-nutrient soils and a mix of substrates (sand, gravel, decaying wood, ash…). Shallow soils, drought stress and contamination prevent fast growing species from dominating the vegetation. The heat brought by mineral surfaces enables species to extend their range northwards and to survive harsh winters. The mosaic of different habitats provides feeding and nesting grounds for a wide variety of animals:

As ever, the most unprepossessing site, littered with dumped rubbish, is home to some exciting things. Today the streaked bombardier beetle, Brachinus sclopeta. pic.twitter.com/ZW4xI1Pb94

The importance of some brownfield sites for biodiversity has been recognised through their designation as SSSI (Site of Special Scientific Interest), LNR (Local Nature Reserve) or SINC (Site of Interest for Nature Conservation). Sadly, this only covers a minority of brownfield sites in the UK. With the need to build new houses and planning restrictions imposed on Green Belt, many local authorities have chosen to prioritise brownfield land for development.

In the Thames Gateway area for example, over half of nearly 200 wildlife-rich brownfields have been lost in only a six-year period between 2005 and 2011 (Robins et al., 2013). Scientists believe that the current rate of loss of brownfield land is unsustainable.

The National Planning Policy Framework (NPFF) published in 2012 (and revised in 2019) stated that ‘previously developed’ land, treated as synonymous with ‘brownfield’, should be prioritised for development as long as it is not of ‘high environmental value’. Unfortunately, the NPPF does not provide a definition of “high environmental value”!

As is often the case in the context of planning, the value of a site may be defined by its status of protection, and whether or not it contains protected species and habitats. In the case of brownfield land, the total area of sites which have a conservation designation and those which contain protected habitats only amounts to a very small proportion of brownfield overall, around 6-8%.

And it is not enough.
Why? Brownfield land is particularly valuable for invertebrate conservation. Many insect species live in metapopulations (networks of small isolated populations living in separate sites). This concept is not difficult to understand: think about the population of an insect species as being dynamic. Small sub-populations may disappear from a particular site, but reappear in another site that offers a similar suitable habitat thanks to “pioneer” individuals who will disperse and create a new sub-population. The range of a species can therefore vary over time, but its overall population numbers may remain stable.

Brownfield land typically offers patches of suitable habitat between non-suitable habitat (paving, buildings, agricultural land). Once we start losing these suitable patches, a species may see its numbers drop to such a low level that it becomes incapable of dispersing and establishing new populations. This is how species become locally extinct.

It’s not only development that threatens brownfield. When brownfield land is turned to parkland, “greening” (landscaping), with the addition of nutrient-rich topsoil, perennial plants and trees can result in the loss of rare species which become unable to compete. Management practices such as grass cutting can destabilise the complex ecology of brownfield land.

Examples from abroad show that it is possible to find uses for brownfield land, while preserving some of its unique features and habitats. Germany, which is littered with crumbling 19th century factories and steel plants, offers inspiring examples, such as the Zollverein Park in Essen, West Germany. Here’s a beautiful description of the site by the team of architects:

There are landscapes, that everyone has forgotten. They are left lying somewhere, nobody cares about them. They can be found everywhere; out in the country and in the cities. They are forgotten no-man’s-lands. The life of the animals and plants that inhabit them remains rather hidden. “Normal people” are rare; you may see a few kids or teenagers who are looking for adventure. And a few, let’s call them “bizarre insiders”, who look at these forgotten landscapes as uncultivated treasures. 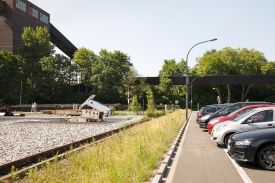 In areas where development is difficult to avoid, carefully-designed green roofs can help mitigate the loss of brownfield habitats, although they hardly make like-for-like replacements.

In the UK, charities such as Buglife, Butterfly Conservation or Amphibian and Reptile Conservation, have been pleading for brownfield land to be given the consideration it deserves. As they rightly point out, “In many built-up areas, brownfield sites may be the sole semi-natural green-space available and the only option for the local community to connect with nature. “

Yet even conservationists are struggling to convince planners and developers of the need to care for brownfield land. Why are we blind to these rich and interesting habitats? It may have to do with the UK’s cultural history, as highlighted in this excellent paper:

Brownfield sites look ugly. Though quite often they are very flowery, they don’t fit this image of the rural idyll with hedgerows and rolling hills and woods and streams and lakes. There aren’t any Constable pictures of derelict rubble strewn landscapes. Brown is the colour of dirt and they are seen as dirty and grimy and fly tipped with rubble. Not very nice.” Richard Jones, urban entomologist.

The UK, often seen from abroad as a land of green pastures and rolling hills, is paradoxically one of the most nature-depleted countries in the world. Natural and semi-natural habitats, whether it is brownfield or wildflower verges are somehow considered as “not enough”, and in need of tidying and improvement. How can we successfully conserve what we are unable to value?